There is no current federal law creating a reporter’s privilege.  Below is a helpful map, produced and published by the Reporter’s Committee for Freedom of the Press, which shows which states have adopted a “shield” rule for journalists.  Note that the statutes vary widely, between their descriptions of the scope of the privilege, to their definition of journalist. 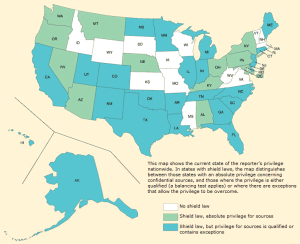 Source:  Reporter’s Committee for Freedom of the Press

Share this post:
Darrell Phillips is a journalist-turned-lawyer who advises and represents members of the media in contract matters, employment disputes and in litigation relating to speech rights. He also frequently advises corporate clients on media relations matters.