Carlson v. Ailes: At least one reason she did not sue the company

I had long been wondering why former Fox anchor Gretchen Carlson had sued Roger Ailes rather than her corporate employer, Fox News Network LLC.  The suit has been discussed at length by various media, and a copy of the complaint is available on Ms. Carlson’s lawyer’s web site (Link: Here).  The lawsuit is essentially an action alleging gender-based discrimination and retaliation filed under New York City’s “little” Title VII statute.  Ordinarily, actions of this nature exist between employee and employer (under federal law and many state statutes), and Ailes was clearly an agent of her employer.  (Note:  The NYC statute prohibits discrimination by “an employer, an employee or an agent thereof.”  As Ms. Carlson alleges in her pleadings, this statute may permit one employee to sue another individually.)

It appears clear now, at least to me, that Carlson may have sued Ailes, and not her employer, to try to avoid an arbitration clause in her employment agreement.

The suit is pending in federal court in New Jersey, originally filed in state court but removed by counsel for Ailes to federal court.  Contemporaneous with Ailes’ removal of the suit, his counsel filed a motion to compel arbitration with the court, based on Carlson’s employment agreement.  You read his legal argument here.

On Friday, July 15, 2016, Ms. Carlson’s lawyers filed their brief opposing Ailes’ motion to compel arbitration.  You can read it here.  In it, she argues that the arbitration agreement is with Fox, but not Ailes.

Somewhat less interesting, but also noteworthy, Mr. Ailes’ lawyers on Friday also filed a motion to transfer venue to the Southern District of New York.  You can read that motion here. 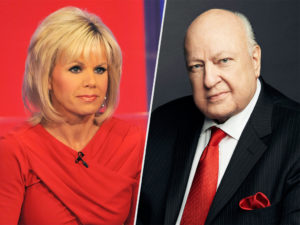