Families of Virginia shooting victims may have limited recourse against employer

In the wake of the shooting of Alison Parker and Adam Ward, I have been glued to the news coverage of the tragic event. While the story was horrific from jump, I became particularly interested when I received the breaking news emails identifying the name of the suspect, Vester Flanagan. Flanagan and I worked together at WTOC in Savannah in 1999. He and I frequently worked the same week-day nightside shift. I’ve been in contact with other contemporaries who worked with Flanagan at that time and none of us had then identified any of the indicators of mental illness and rage that define the person he appears to have become during the last decade.

The video he recorded and uploaded is particularly haunting to me because there appears to be a moment when Alison Parker, mid-live shot, looks at Flanagan or notices him standing behind videographer Adam Ward. I cannot be certain whether she did or did not. I know however, from experience, that reporters must simultaneously 1) become acutely aware of people around them when doing live shots; and 2) remain totally nonplussed (at least externally) by the people around them. Every reporter who has done live television has had hecklers, drunks, kids, thugs and even well-intentioned television fans attempt to distract them from their live report or interview. It is clear from Flanagan’s point-of-view video that he approached the crew standing alone on that balcony and stood there behind Mr. Ward for more than thirty seconds. Even if Ms. Parker had intellectualized the fact that Flanagan was there, behind Mr. Ward, I cannot imagine her doing anything differently. How could she know what his intentions were? Reporters train to either “react appropriately” to their surroundings during live shots or to avoid distractions. It is hard for me not to remember my own experiences, willing myself to drown out those distractions and to remain in control of my live shot; it is hard not to imagine Ms. Parker engaging in the same self-discipline.

During one of the national newscasts today, an expert was asked about legal recourse that the families of Parker and Ward might have against the television station. There was discussion about Flanagan’s history of rage and about the station having put staff on notice about Flanagan lurking nearby the station. There was a lot of bluster about the station’s exposure to litigation because they “knew” (or should have known) that Flanagan was a risk. The suggestion was that the station knew he was a threat; the implication, as I heard it, was that the station could have, or should have, done something to prevent this shooting and may be legally liable as a result of not having done more.

Unfortunately, while the families of Parker and Ward may have legal recourse against third-parties (for example, Flanagan’s estate or the shopping center, if they can show that Bridgewater should have had certain security and did not, etc.), their recourse against the employer, the television station, appears to be limited to a maximum of $11,000 each. I am neither a Virginia lawyer, nor am I licensed to practice in that state, but a quick glimpse at the state of the law there appears to show consistencies with many states across the country. An employee injured or killed while on the job is limited to worker’s compensation (or workman’s compensation) benefits from their employer.

In Virginia, the rights and remedies provided in the Worker’s Compensation Act are exclusive of all other rights and remedies of an employee or his estate at common law or otherwise. Clean Sweep Prof’l Parking Lot Maint., Inc. v. Talley, 267 Va. 210, 213, 591 S.E.2d 79, 81 (2004)(citing Peck v. Safway Steel Prods., Inc., 551 S.E.2d 328, 329 (2001)). To me, this means that even if the families of these victims believe that the station should have done something differently, their only avenue to recover against the station is through the worker’s compensation policy carried by the station.

State law generally requires employers to carry worker’s compensation insurance. In exchange for carrying it, employers cannot be held liable for more than these policies provide when an injury occurs during the performance of one’s job duties. In Virginia, “[a]n injury will therefore be deemed to ‘arise out of’ the claimant’s employment ‘when there is apparent to the rational mind upon consideration of all the circumstances, a causal connection between the conditions under which the work is required to be performed and the resulting injury.’” Stillwell v. Lewis Tree Serv., Inc., 47 Va. App. 471, 477-78, 624 S.E.2d 681, 683 (2006)(quoting Combs v. Va. Elec. & Power Co., 525 S.E.2d 278, 282 (2000); see also United Parcel Serv. of Am. v. Fetterman, 336 S.E.2d 892, 893 (1985)). In this case, not only were Parker and Ward on the job, they were literally “on the air” when the suspect allegedly shot them.

The amount or extent of an employer’s liability is typically set out in state statute. In Virginia, for example, it appears the dependents of an employee killed on the job may be entitled to 400 to 600 weeks of that employee’s compensation (from the time of death). Va. Code Ann. 65.2-512.  It does not appear that either Ms. Parker or Mr. Ward had any statutory dependents (i.e., a spouse, a child, or destitute parents). In the absence of dependents, the Virginia Worker’s Compensation Act appears to only require an employer to pay burial expenses not exceeding $10,000.00 and the reasonable transportation expenses for the deceased not to exceed $1,000.00. Va. Code Ann. 65.2-512(B). The effect of the statute feels particularly rigid in this instance, because it appears both Parker and Ward were engaged to be married in the near future.

Worker’s compensation laws are both lauded and loathed. They entitle an injured employee to recover damages without having to prove that the employer did anything wrong (as they would have to do in a personal injury lawsuit). On the other hand, the damages are limited to amounts fixed by statute and typically exclude pain and suffering. Employers face the burden of having to pay premiums on potentially expensive policies, but enjoy the benefit of being protected from costly personal injury suits.

While it may indeed be other things as well, as between employer and employee, the horrific shooting in Virginia this week appears to be an on-the-job injury. As a result, the families of Parker and Ward may face an uphill battle if they seek to recover against the station. 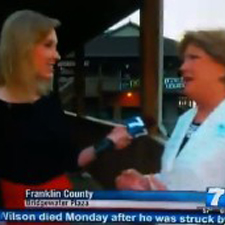