A New York City Supreme Court judge granted Geraldo Rivera’s Motion to Dismiss a complaint filed against him by William Morris Endeavor Entertainment, LLC, a national talent agency.  According to the Complaint, which you can read here, Rivera stopped paying his ten percent (10%) commissions to William Morris in 2010.  The agency sued for breach of contract, unjust enrichment and quantum meruit.

Rivera originally hired William Morris by letter agreement.  You can read that here.

According to the pleadings, a series of renewals occurred, also by letter agreement, and were accompanied by boilerplate AFTRA agreements.  You can read the most recent one of those here.  Rivera claims he stopped paying because he believed his agreement was with a particular agent and that he did not need to pay the agency once that particular agent was no longer there.

The dispute centered around the existence of memorialized agreements and their express language.

Among the reasons for granting the dismissal is New York’s Statute of Frauds, which requires that agreements contemplating performance over a time period exceeding a year must be in writing.  You may read the Order here.  It explains the factual and procedural background of the case and is an interesting read.

According to the NY Daily News:

“This is a body blow to how Hollywood does business,” Rivera said. “It deals a blow to evil agents who wanted money for work they never did.” 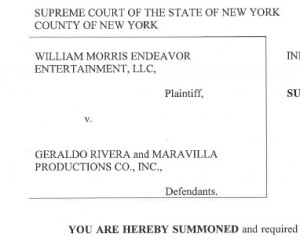