Earlier this year, an Arkansas sports reporter/weekend anchor sued his current employer, Gannett-owned KTHV alleging, among other things, violations of Title VII and the Arkansas Civil Rights Act, as well as sundry other contract causes of action. All of the separate claims derive from allegations of racial discrimination, even the contract claims.

You can read the Complaint here. The Plaintiff attached a copy of his EEOC charge, as well as a 1999 suit filed against Gannett by another ostensibly aggrieved former reporter which appears to have been settled.  (Note:  Arkansas is a part of the 8th Circuit Court of Appeals.  This case was filed in federal court in Little Rock, Arkansas).  Also, while originally filed as a class action, the suit has been amended to name only the individual plaintiff. 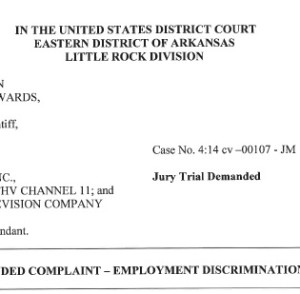 To thumbnail: Plaintiff is an African-American male who was hired in 2003 as a producer/reporter and alleges that management promised that he would be promoted, over time, to the number one sports position. I gather from the pleadings that there is no writing that confirms this. Plaintiff claims Station continued to make promises to him, throughout his employment, that he would be promoted. Plaintiff claims that, while at KTHV, he was offered more lucrative opportunities on two separate occasions in larger markets, by WEWS (Cleveland) and KPNX (Phoenix); in the first instance, he claims he turned the position down in reliance on KTHV’s promises to promote him, and in the second instance, he claims KPNX elected not to hire him because of adverse remarks made by Station management to KPNX management.

Needless to say, he was never promoted to the number one sports position at KTHV.

As part of his case, Plaintiff alleges a number of different things about Gannett. He alleges that Gannett has an all-white corporate board, generally all-white management, favors all-white anchors on its newscasts and, most importantly, justifies the appointment of all white anchors through the use of “subjective criteria” like focus groups and “corporate restructuring reasoning”, etc. He further alleges that there is no documentation indicating a “standardization” of the appointment and promotion process.

I do not know anything about the merit of his claims or the composition of Gannett’s corporate structure or whether there is a pattern or practice of discrimination in favor of white employees. This is not a commentary on the merits of this lawsuit.

I am posting about it here because the following points are interesting to me and are worth noting:

Unless you have “disparate treatment” (open express statements or incidences of discrimination), a plaintiff in one of these cases has to try to prove what is called “disparate impact.”  Essentially, this means that while an employer’s policies may be racially neutral on their face, those policies or the conduct of management may have a discriminatory effect.  These cases are obviously harder to prove, and are typically reliant on circumstantial evidence (like, for example, the fact that most or all of a station’s anchors happen to be white).

To bring one of these cases, an employee has to be able to prove certain basic facts.  That gets the employee in the door.  The burden then shifts to the employer.  If an employer can show that its decision to not promote a particular individual is supported by a “legitimate, non-discriminatory business purpose” and the employee cannot disprove that, usually, the employer can prevail.

But how does a TV station prove that its decision was not discriminatory?  Usually, that station’s lawyers provide the employee’s personnel file which, ideally, is rife with documented policy violations.  In this case, Plaintiff seems to believe that Gannett is going to say that it did not promote him because of focus group data, but that this data is really a “pretext” for racial animus.  Pretext is a legal term of art.  In essence, the Plaintiff needs to show that the station’s explanations for not giving him the job he wanted are bogus.

The problem in television is that management decisions to put people on the air are often based on ratings, research and focus group data.  More than many other industries, these ostensibly “objective” measurements really do have “subjective” values at their core.

The leading case on television discrimination happens to be an 8th Circuit case called Craft v. Metromedia, Inc.  Although not entirely on point, the Craft case shows that courts seem to understand the subjective nature of television staffing. Among other things, the Craft court was considering a sex-related discrimination claim, wherein Christine Craft alleged the station’s “standards” (dress, make-up, hair, etc.) for on-air personnel were stricter and more strictly enforced as to females than as to males. The 8th Circuit gave stations some wiggle-room in its opinion on this “grooming” issue:

Courts have recognized that the appearance of a company’s employees may contribute greatly to the company’s image and success with the public and thus that a reasonable dress or grooming code is a proper management prerogative. Evidence showed a particular concern with appearance in television; the district court stated that reasonable appearance requirements were “obviously critical” to KMBC’s economic well-being; and even Craft admitted she recognized that television was a visual medium and that on-air personnel would need to wear appropriate clothes and makeup. While we believe the record shows an overemphasis by KMBC on appearance, we are not the proper forum in which to debate the relationship between newsgathering and dissemination and considerations of appearance and presentation—i.e., questions of substance versus image—in television journalism. The record does not leave us with the “definite and firm conviction” that the district court erred or adopted an impermissible view of the evidence when it concluded that KMBC’s appearance standards were shaped only by neutral professional and technical considerations and not by any stereotypical notions of female roles and images.

So, on the issue of “grooming,” the 8th Circuit seems to acknowledge that stations need to accommodate their viewers’ differing tastes, but stops just short of affirmatively allowing different rules for the different sexes.

In fact, it is a fairly well-recognized rule in the area of employment discrimination, that “customer preference” is not a defense to a claim of discrimination. The Craft case acknowledges this:

Craft’s argument is that these differing standards as to females reflect customer preferences, which a number of cases have held cannot justify discriminatory practices.

Think about what that means in this context. A television station can probably not blame its viewers for discriminatory staffing decisions (i.e., “we are a business and our viewers do not like to get their news from African-Americans.”).

Here’s another 8th Circuit analysis of the use of “customer preference” as a defense:

Although this Circuit has not directly addressed customer preference as a business justification for policies having a disparate impact on a protected class, cases from other circuits have not looked favorably on this kind of evidence. See Diaz v. Pan Am. World Airways, Inc., 442 F.2d 385, 388–89 (5th Cir.) (customer preference may only be taken into account when it goes to a matter affecting the company’s ability to perform the primary necessary function or service it offers, rather than a tangential aspect of that service or function), cert. denied, 404 U.S. 950, 92 S.Ct. 275, 30 L.Ed.2d 267 (1971); Gerdom v. Continental Airlines, Inc., 692 F.2d 602 (9th Cir.1982) (holding that customer preference for slim female flight attendants did not justify a discriminatory policy where weight was unrelated to job performance), cert. denied, 460 U.S. 1074, 103 S.Ct. 1534, 75 L.Ed.2d 954 (1983). The existence of a beard on the face of a delivery man does not affect in any manner Domino’s ability to make or deliver pizzas to their customers. Customer preference, which is at best weakly shown by Domino’s survey, is clearly not a colorable business justification defense in this case. Significantly, the survey makes no showing that customers would order less pizza in the absence of a strictly enforced no-beard rule.

So, what does this all mean?

First, you should be able to tell that the law is still a little wobbly on what a station can use as a viable defense to a discrimination claim.  The best defense is always going to be that a decision was race-neutral, that it was performance-based and that the employee had multiple opportunities to improve his or her position but suffered an adverse employment action as a result of progressive discipline.

It will not help if, as Plaintiff here alleges, Gannett’s corporate and station management structures are dominated by white employees and if most of Gannett’s anchors across the country are white.  If this case is not settled, then discovery will likely focus on Gannett’s composition across the company.

Second, if, in this case, Gannett does in fact intend to rely on focus group data and on “corporate restructuring reasoning”, as Plaintiff seems to believe, the Court will have to drill down on the focus group testing to determine if the sampling and the questions are themselves in some way discriminatory.  Because “customer preference” is not a defense, the Court will have to determine if the customer testing, the focus groups, are inherently racist or discriminatory.  To win on what appears to be his primary theory, Plaintiff will have to show that Station’s focus group testing was not race-neutral, but that the sampling and the questions were tainted with racial animus.  Moreover, he will have to show that Gannett consistently deployed this animus at its stations across the company.

Again, I reference this case because it is current and broadcast-related, and because it gives me an opportunity to discuss some of the nuances of the law in this area.  I cannot, and would not, speak to the merits of an individual pending case, other than to point out that these cases create significant challenges for both sides.

Share this post:
« Analysis of Comcast lobbying expenditures taints merger hearing
What a journalism student should expect in his first broadcast employment contract »
Darrell Phillips is a journalist-turned-lawyer who advises and represents members of the media in contract matters, employment disputes and in litigation relating to speech rights. He also frequently advises corporate clients on media relations matters.