You can watch the segment here. 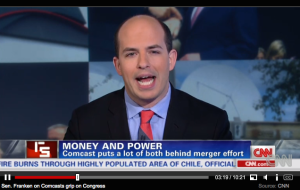 The segment concludes with an interview with Al Franken, but I think the highlight of the segment is the packaged content, wherein Stelter reveals that “every one of the 18 members of the committee has gotten cash donations from Comcast at some point during the last decade.”

Arstechnica has a piece on this too:

But just how many politicians have accepted money from Comcast’s political arm? In the case of the Senate Judiciary Committee, which held the first congressional hearing on the Comcast/TWC merger yesterday, the answer is all of them.

Sen. Chuck Schumer (D-NY) led the way with $35,000 from the Comcast federal political action committee (PAC) between 2009 and 2014, Sen. Patrick Leahy (D-VT) received $32,500, and Sen. Orrin Hatch (R-UT) received $30,000. These figures are the combined contributions from Comcast to the senators’ campaign and leadership committees. (Schumer has recused himself from the merger hearings because his brother, a lawyer, worked on the deal.)